Who is Behind America’s Startup Surge?

During the pandemic, applications for new businesses surged—a surprising development during a bleak economic period. New analysis reveals that this entrepreneurial growth was particularly robust in majority minority counties. Among our analysis of demographic trends in entrepreneurship, we found that:

Amid the economic chaos and uncertainty of the COVID pandemic, a surprising trend emerged in the United States: record levels of entrepreneurial activity.1A dramatic increase in the number of Americans applying to start businesses was a welcome surprise, as entrepreneurship acts as an engine of economic recovery by providing opportunities for individuals to earn while also creating a more dynamic economy overall.2And analysis of the US Census Bureau’s Business Formation Statistics data reveals that the pandemic-era startup surge may have been more pronounced for minority entrepreneurs.

As we continue to analyze the economic impacts of the pandemic in hopes of preparing for the next crisis or economic downturn, it is important to ensure we understand how different communities across the country experienced the most recent one. In this report, we analyze new business applications at the county level to better understand where, and who, may have been at the center of this entrepreneurial boom.

1. New business applications are way up.

New business formation has been on the rise. In 2019, 3.5 million applications were filed. One year later, in 2020, Americans filed paperwork to start 4.4 million businesses. In 2021, that number jumped to a staggering 5.4 million.3 This spike in entrepreneurship deviates significantly from previous economic downturns—after the Great Recession, the startup rate actually fell by a fifth between 2007 and 2009.4 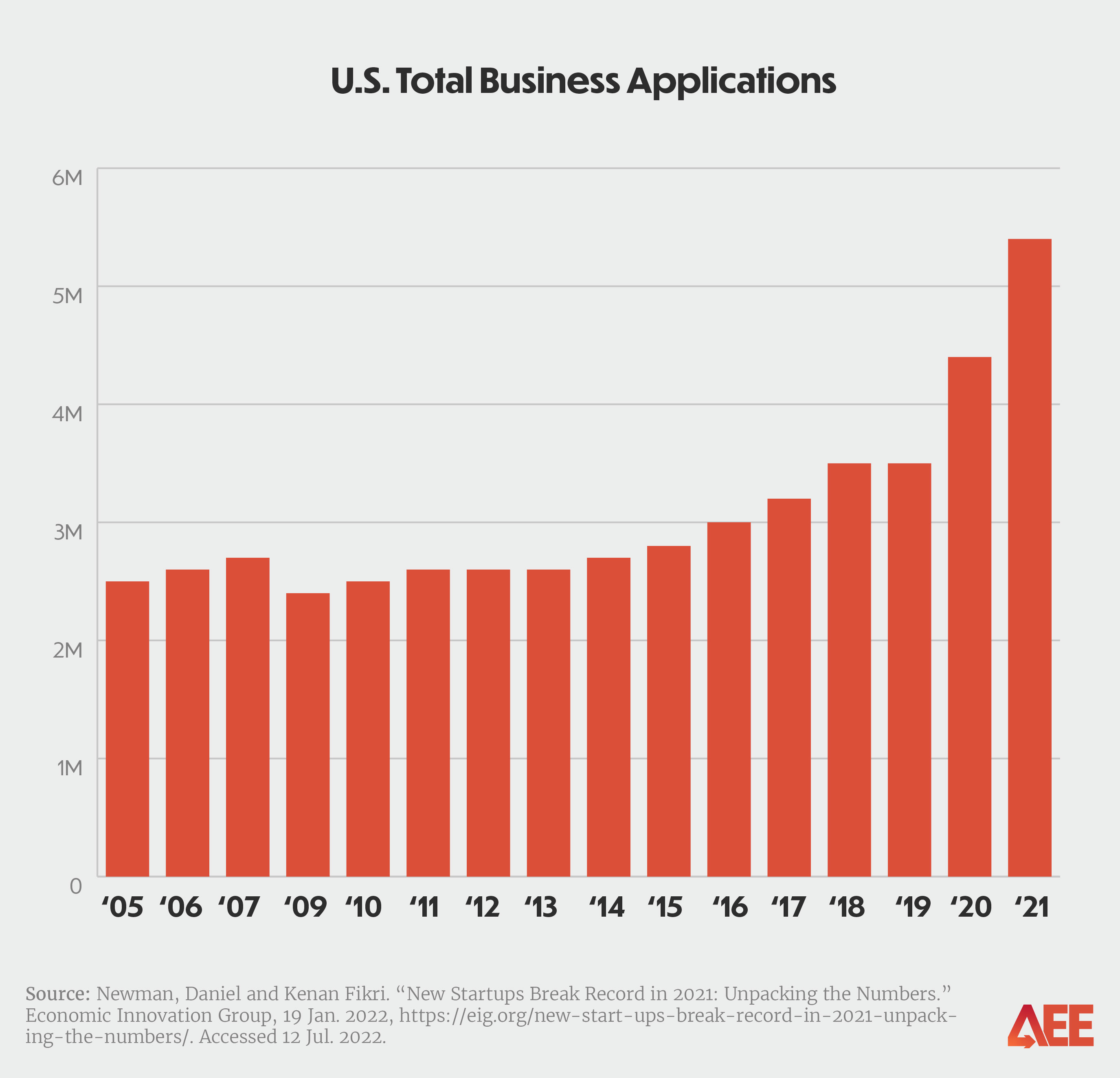 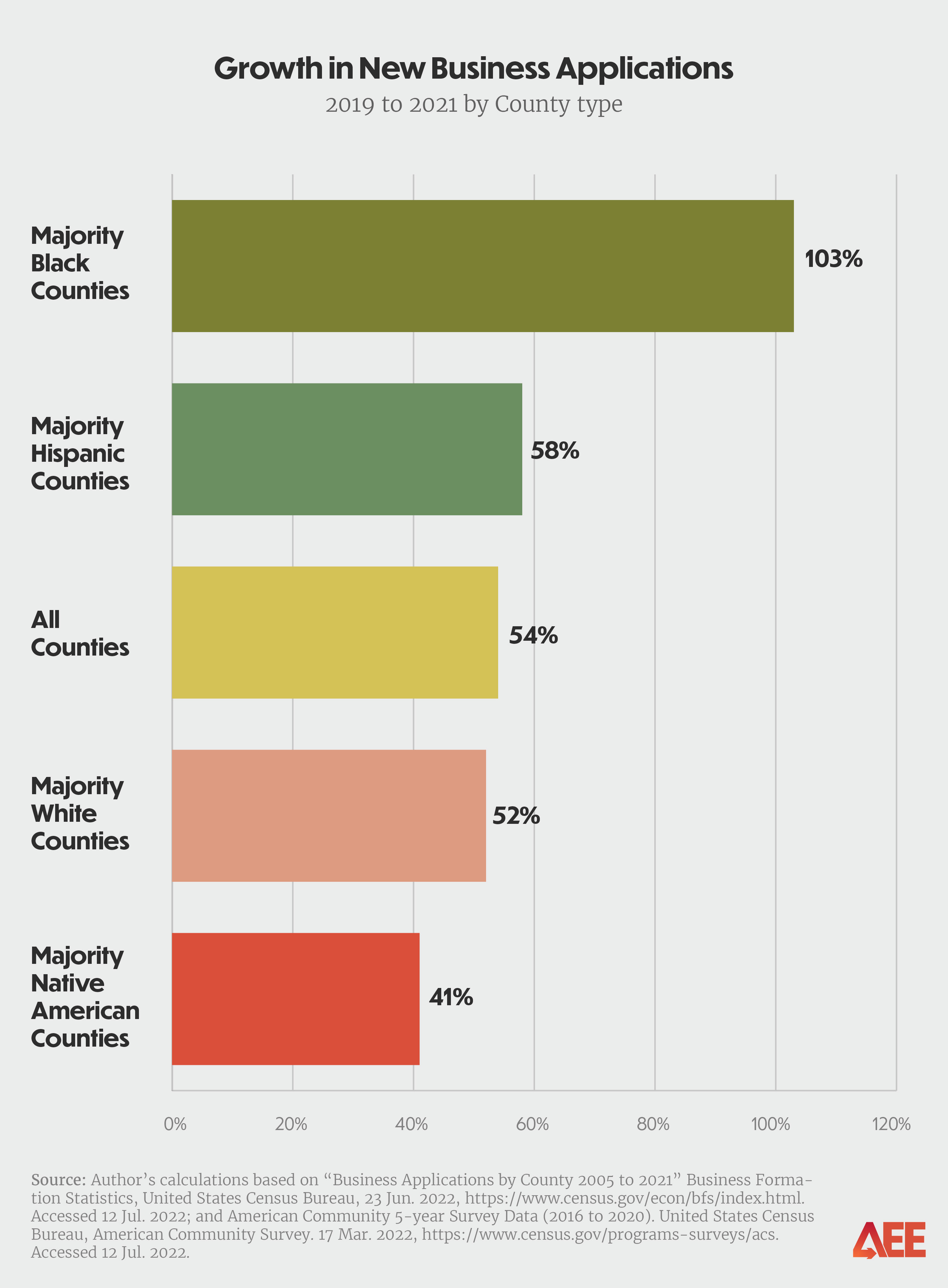 The surge in Black entrepreneurship is particularly pronounced. In counties where over 75% of residents are Black, new business applications increased a staggering 198% from 2019 to 2021.6

The number of new business applications in Black counties in 2021 was almost 3.5 times higher than they were in those same counties in 2005.

4. Entrepreneurial growth is spreading to more of the country.

The pandemic’s startup surge looked different than one might have predicted. Entrepreneurship growth was not concentrated in traditionally dynamic hubs such as Silicon Valley or the downtowns of other big coastal cities. Rather this growth seems to have happened much more in majority minority neighborhoods.

The map above provides a geographic view of the change in new business applications from 2019 to 2021 at the county level. While it is evident that large swaths of the country saw notable increases in applications, there was a particular surge in the Southeastern part of the country. And even though this region as a whole saw a significant boom in people looking to start new businesses, majority Black counties outpaced their non-majority black county neighbors in almost every Southeastern state.10

Zip-code level analysis of business formation data by the National Bureau of Economic Research (NBER) further supports that minority communities outpaced their white peers in starting businesses. For example, their research finds that while the rate of overall new business registrations in New York City in July of 2020 was 45% over the rate recorded in 2019, that number masks a much more interesting story. South Harlem, a largely Black community, experienced a consistent boom in business applications during that summer. Yet, the nearby Upper West Side, which has significantly fewer Black residents, did not see an increase in registrations compared to 2019.11 NBER’s findings hold up across different metro areas. Houston and Atlanta communities with higher percentages of Black residents experienced more relative new business growth than other areas.12

Drivers Behind these Trends

There have been a number of dynamics which help explain why Black communities in particular saw a significant growth in entrepreneurship during the pandemic. These include:

Increased government-provided capital. Policymakers’ quick response to the pandemic in the form of broad economic relief not only helped stem the economic pain felt by individuals, but also probably provided capital to pursue entrepreneurial ventures.13 The United States experienced a unique entrepreneurial boom, seeing a much larger increase in entrepreneurship than any other advanced economy.14 The widespread fiscal support may, in part, explain why—especially for minority entrepreneurs who on the whole face greater barriers to acquiring the capital they need to get started.15 Expanded unemployment and direct stimulus checks could have provided many individuals with the financing to get a new business off the ground in the absence of other forms of support.16

Economic necessity. While pandemic relief packages certainly created a safety net, many individuals and businesses continued to struggle as unemployment soared and people stayed home. As such, economic necessity likely played a critical part in the growth in minority entrepreneurship. Researchers from the Kauffman Foundation found that 30% of new entrepreneurs in 2020 were unemployed when they started their business, which was double the pre-pandemic rate.17 In more normal market conditions, entrepreneurs might not leave the safety of their jobs to pursue a new venture, but when that job goes away, individuals may be more apt to start businesses as a means of making ends meet.18 In April 2020, the white unemployment peaked at 14.1%; that same month the Hispanic unemployment rate was 18.8% and the Black unemployment rate 16.6%.19 Higher unemployment rates amongst minority communities could have meant that while their white peers felt they could safely stay at their jobs, people of color who were out of work began starting businesses because they had to.

Changing nature of work. The pandemic also in many ways realigned priorities for workers. A shift to remote work and a complete alteration in day-to-day life upended both how Americans were purchasing and consuming goods and also what they desired out of work more broadly. For some, that meant taking the chance to pursue ventures they had been thinking about for years, while others capitalized on new gaps they saw in the current market with innovative solutions. Evidence of this is clear in the rapid growth of online microbusinesses, which usually have fewer than 10 employees, during the pandemic.20 Black entrepreneurs now represent 26% of those starting microbusinesses, compared to just 15% pre-pandemic.21 These businesses typically require less capital to get off the ground, and as such may be an easier market for people of color, who face significant barriers to achieving financing, to take advantage of.

Local and regional support. Finally, local and regional support systems played a crucial role in helping minority entrepreneurs overcome barriers to starting and growing businesses. Alongside larger federal support, local initiatives can help increase minority entrepreneurship by assisting with things like acquiring commercial space, building out mentorship networks, and accessing capital.22 During the pandemic, new programs like Washington DC’s Commercial Acquisition Fund, which helps small businesses who typically lack access to capital purchase properties, and the National Urban League’s Start Up Together, a small business development program which aims to help underserved small businesses recover from COVID-19, and a host of other programs worked to provide entrepreneurs of color with the tools they need to succeed.23